I know there are many of you out there that may not agree with this position, but I feel this is something firefighters and more importantly fire chiefs need to hear. A little background on this article is needed. I was promoted to an officer role early in my career as a firefighter. The captain who later on became our fire chief handed me a red lieutenant’s helmet and boom, I was now sitting in that right front seat.

Now don’t get me wrong I wanted to be promoted, but boy I had no clue what to do. I was that dog chasing a car who really didn’t know what to do with it now that I had it. I felt comfortable as a firefighter and really wasn’t sure what was expected from me or what responsibilities I was in fact responsible for. I thought there was some sort of training or at least some type of guidance to help me be an officer, but there wasn’t.

So, since I didn’t feel comfortable with my role what so ever, I figured I should study up on what I got myself into. I was googling like crazy trying to find any training or advice I could. I took the National Fire Academy Managing Company Tactics Operations and felt it had given me a good tactical foundation but felt there was more to be learned. I stumbled upon the Command Officer Boot Camp (COBC) in Pensacola Beach, Florida. Now this was a training I could get behind, at the time it was just starting and was only $125 for the three day class and was on the beach. It was a win win!

I go to this training and I am blown away with some of the information! The participation from the local fire departments and people from as far as Massachusetts and more. This was some of the greatest information I had received in my early career. I wrote an entire notebook worth of notes and the classes invigorated me. I was so happy to have taken the chance on the conference and gone.

One of the instructors was a Battalion Chief with the city of Atlanta and he told us in his class that Atlanta requires all their firefighters to attend at least one outside of the state training a year. Now they are obviously a big department and can afford sending people to outside of Georgia to go to training, but felt this was such an interesting policy to have. The more and more I thought about it, the more I thought this was such a great idea.

The US is such a large country and what works in Ohio may not work in Maine or Florida, but that doesn’t mean we can’t learn from one another. So I’ve been taking trainings as I could in different parts of the country ever since. If you can afford it and make it work for you and your family. Do yourself a favor and invest in yourself and your career! It’s well worth the time, money, and effort, it makes you just that much more of a valuable firefighter to your department.

As always stay safe out there and remember, we are and always have been each other’s keeper. Let’s make sure we make it to retirement. 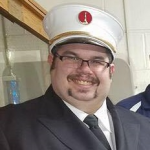 About the Author: Nick Magoteaux is the Co-Executive Director and President of Brothers Helping Brothers. Nick has over 15 years of experience in public safety and is a student of the fire service. Nick has studied leadership extensively over the last few years and is always trying to find something new to introduce to his local fire service brothers.